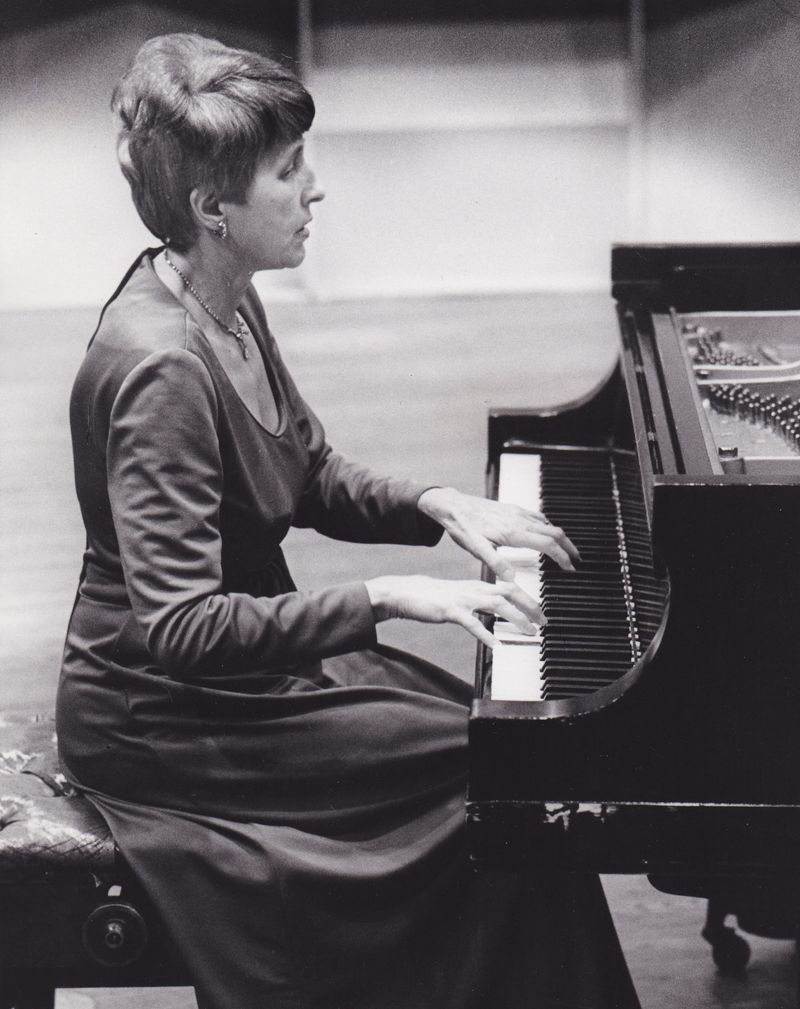 I have learned with a mixture of great sadness and warm memories that Edith Stearns, my valued recital accompanist and chamber music partner in the 1960s and 1970s, passed away in late 2016 at the advanced age of 99 after a very long and rewarding life in the service of music. She was predeceased by her husband, Charles Taylor Trask. Like myself a graduate of Boston University's School of Music, she had taught in the school's piano department for 42 years and served for many of them as the department chairperson. She also had a rich and varied career as a recitalist and orchestral soloist, both here in the United States and in many European countries as well. One of her first accomplishments was winning the Chickering Piano Contest in New York city at the tender age of 16 -- the second place finisher in that competition was also a young Boston area native by the name of Leonard Bernstein. She was the first woman chosen by the U. S. State Department's Division of Cultural Programs in the 1950s and 60s, giving over 50 recitals and radio performances in various European countries. These performances were designed to present a wide spectrum of contemporary American composition to European audiences, a demanding and time-consuming repertoire from which she did not shrink.

My first collaboration with Ms. Stearns was on my senior year bassoon recital. Having worked with several student pianists during my undergraduate years, I realized that I would need a seasoned professional performer to handle the difficult and unusual repertoire I had chosen for that program, I approached Ms. Stearns, whom I barely knew, and and asked if she would be willing to undertake the task of accompanying me on my recital. At the time, it was virtually unheard of for a faculty member to perform in concert with a student, let alone a lowly undergraduate. I fully expected to be turned down with a lame excuse that she would be "too busy" to perform with me, especially given her involvement with end-of-semester activities such as piano juries and recitals. Much to my amazement, she graciously consented to perform on my recital and readily found the time to prepare for that performance in addition to all of her other responsibilities.

I quickly learned that Ms. Stearns was a demon sight-reader, a very quick study, and a solid and dependable performance partner. She came to the first of our two scheduled rehearsals with all of my music well under her fingers. We played through each piece once, discussed a few points of interpretation, then played it through a second time in a virtually finished performance. We cancelled the second rehearsal, for which there was no need. In this and our successive collaborations over the following decade, I never heard her make a mistake or fumble a passage, either in rehearsal or performance. She was always impeccably prepared and delivered the goods every time without fail. She was my very ideal of what a professional musician should be.

During the mid 1960s, after having completed a master's degree in musicology, I was free-lancing as a bassoonist in the Boston area and had founded and managed a professional chamber music ensemble, the Blue Hills Woodwind Quintet. At the time, Ms. Stearns was, in addition to her many other responsibilities, managing a monthly concert series for the Sears Art Gallery in the Waltham Public Library. She approached me, asking if my quintet would be willing to perform in that series; she opined that the menu was a bit heavy on solo pianists, violinists, and the like, and could benefit from some different performing groups and repertoire. We jumped at the opportunity to play on this series and returned the favor by asking Ms. Stearns to join with us in works for piano and wind ensemble. I knew she could pull off finished performances with a single rehearsal. I still recall with pleasure our collaborations on several of our programs in such works as the familiar Beethoven Quintet, Op. 16, and the rarely heard Ludwig Thuille Sextet, Op. 6. Remarkably, she played these works, undoubtedly unfamiliar to her beforehand, as if she had known them all her life.

After living and teaching for several years in the Midwest (a period which I still jokingly refer to as my "years of exile") I returned to Boston to pursue doctoral studies at my Alma Mater. Once again I imposed upon Ms. Stearns to accompany me in my recitals, and once again she acquiesed and provided me with outstanding performances in the minimal amount of rehearsal time we both could afford. Remembering from our Waltham performance of the Beethoven Piano Quintet that she had a keen insight into the performance of early Beethoven, I scheduled his youthful Trio for flute, bassoon, and piano for one of my recitals, knowing she would deliver a superb performance of the demanding piano part. She did not disappoint.

At that time, the school had no interest nor program in recorder performance, which had become my major musical interest in the interim. In order to establish the validity of that instrument with the recalcitrant administration, I elected to perform solo and ensemble recitals on both bassoon and recorder to make my point. I ended my recorder ensemble program with a Ouverture-Suite by Graupner for three chalumeaux, the first and as far as I know the only performance for such an ensemble in the annals of Boston music performances. Ms. Stearns, who wisely knew enough not to exceed her own strengths and areas of expertise, had no particular interest in harpsichord nor earlier music in general, so she provided keyboard support only for my two bassoon recitals. My former Kansas student Carrol Hassman, a prodigious organist and church musician who had followed me back to Boston to pursue graduate study, provided the harpsichord accompaniments for my two recorder recitals. I considered myself very fortunate to have the services of both fine keyboard artists on my doctoral recitals.

Edith Stearns was one of the most skilled and consummate musicians with whom I had the pleasure of working during my many years and decades as a performing professional musician. She set the bar very high for me as well as for herself. I would like to think that she was one of the major formative influences in my musical life during my earlier years. I valued greatly her self-effacing professionalism, her profound musicality, and her personal friendship. May she rest in peace.